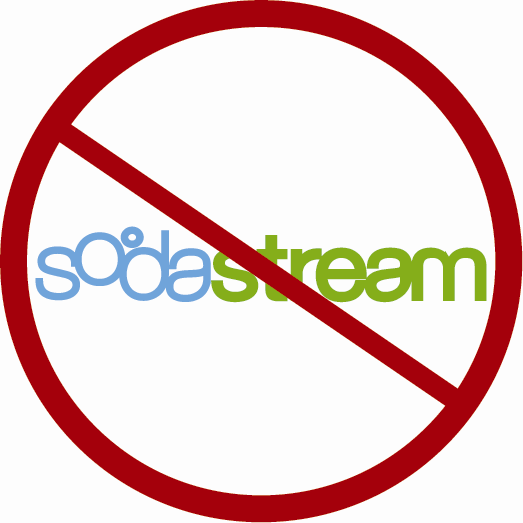 Boycott SodaStream! SodaStream manufactures its beverage carbonating devices in a West Bank settlement. Join WIAMEP, JVP, Sabeel-DC, and others in educating shoppers and calling on local store managers to tell their corporate headquarters to stop stocking the product. Details of specific local actions may be found at Facebook page of Jewish Voice for Peace - DC Metro Chapter. Join the national campaign at sodastreamboycott.org.

Saturday, December 21, 2013, at 10 am: Joint Simulcast Prayer Service with People of Bethlehem at the Washington National Cathedral, Wisconsin Ave at Massachusetts, NW DC. Details at www.nationalcathedral.org or PDF flyer.

Saturday, December 22, 2012, 10 am - 6th Annual Simulcast Worship Service with People of Bethlehem in the Nave of the Washington National Cathedral. See nationalcathedral.org for live streaming. Download the PDF flyer.

The Palestinian Christian Alliance for Peace penned a letter of support for the Oct. 5, 2012, letter from prominent religious leaders to Congress requesting accountability for Israel's illegal use of weapons in OPT. Sign on to a letter to President Obama to encourage adoption of the Oct. 5 letter's recommendations. There is also a letter of support to the signers of the letter.

PUBLIC PETITION to stop desecration of the MAMILLA MUSLIM CEMETERY IN JERUSALEM by Israeli authorities and the Simon Wiesenthal Center.

Jean Zeru's September 2011 address at Notre Dame University advocates for non-violent resistance to end the Israeli occupation and names BDS as a sound strategy for the protection of human rights, international law, and most critically, gives Palestinians hope in their daily struggle. Jean Zeru's wisdom is boundless. She is the first woman in Palestine to chart the path of non-violent resistance to the Israeli occupation, which now has become the norm for Palestinians. Her consistent message of our shared common humanity is a testament to her moral courage and high ethical standing.

Wednesday, September 14, 2011  5:30pm. Join us to protest award of the 2011 Henry C. Turner prize to Caterpillar at National Building Museum, 401 F Str NW DC near Judiciary Square Metro. RSVP  and find details here on Facebook. Also, go to the Rachel Corrie Foundation's webpage to sign on to a petition requesting that the museum rescind this award.

Thursday, September 15, 2011  6pm. Join us in the streets of Washington, DC on the eve of the UN resolution. Assemble at the State Department (22nd & C Streets NW) and march to the White House. Please visit september15.org.

December 18 (Saturday), 2010, 10 am - 4th Annual Simulcast Worship Service with People of Bethlehem in the Nave of the Washington National Cathedral. PDF flyer. 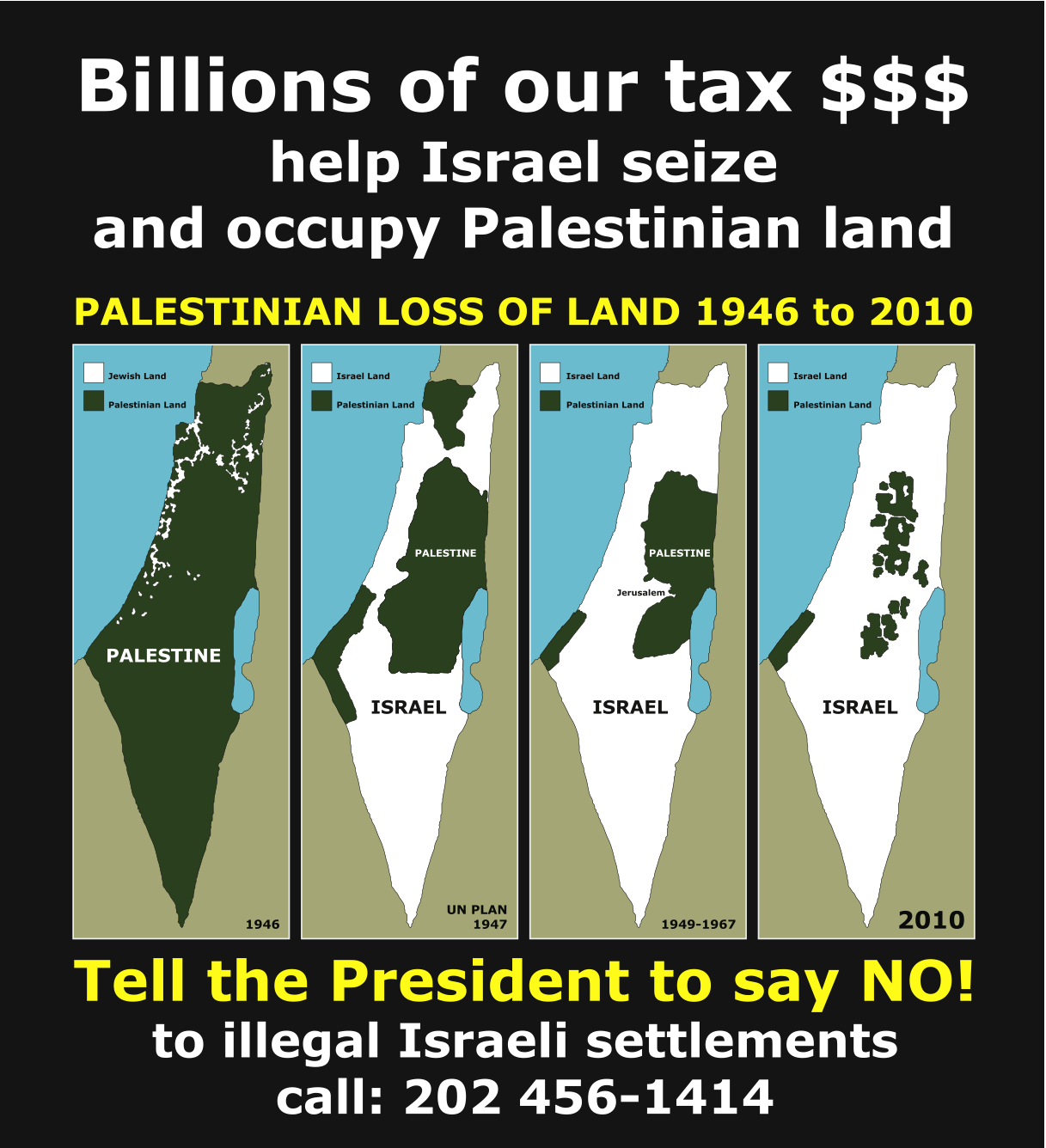 The Settlement Industry from WhoProfits.org

Learn About US Aid to Israel

Wednesday, October 27, 2010, 7pm:  Film screening of With God on Our Side about Christian Zionism with director Porter Speakman and author Rev. Stephen Sizer, at Lutheran Church of the Reformation, 212 E Capitol Str NE, DC. Details in a PDF Flyer.

Saturday, May 15, 2010, 3pm: To commemorate Nakba, sail the Potomac in an act of determination and peaceful defiance! Meet at Washington Harbor (Georgetown) near Nick's Riverside Grill. Other boats welcome, as well as supporters on Memorial Bridge. Support the Gaza Freedom March Nakba competition! Details (pdf).

Monday, May 24, 2010, 12-2pm: We invite you to a lecture by: Ambassador Philip C. Wilcox, Jr. President, Foundation for Middle East Peace: "The Middle East Conflict in the Modern Era" Sixth and I Synagogue 600 I Street Northwest Washington, DC 20001 Details.

December 19 (Saturday), 2009, 9:30 am - 3rd Annual Simulcast Worship Service with People of Bethlehem in the Bethlehem Chapel of the Washington National Cathedral. Please see brightstarsbethlehem.org or download the PDF flyer.

December 3, 2009 (Thursday) 7 pm - Book Reading, Lecture and Discussion with Mark Braverman, author of Fatal Embrace:  Christians, Jews, and the Search for Peace in the Holy Land. At Lutheran Church of the Reformation, 222 E. Capitol Str NE, Washington, DC. Details in a PDF flyer.

December 6, 2009 (Sunday) 2-6 pm -  “YES WE CAN: MIDDLE EAST PEACE” (YesMEP) invites you to an afternoon of MUSIC, THEATER, PLEAS FOR PEACE (from bereaved families) in support of President Obama’s initiative for a two-state solution. Details and tickets at www.yesmep.org.

WIAMEP is pleased to nominate Pam Rasmussen to receive a UNA-NCA Community Human Rights Award for 2009. The awards were presented at the UNA-NCA's annual Human Rights Luncheon on December 10, 2009.

October 1-3, 2009 - Pursue Justice, Seek Peace! Please join us at the Friends of Sabeel Conference at Shiloh Baptist Church, 1500 9th Str NW, Washington, DC, which will link the African-American civil rights movement with the Palestinian struggle for rights and self-determination. Get the final program here. Register online. Get the new press release or a promotional flyer. The following events are highlights of this conference's program:

October 1, 7pm (Thursday) - Hopes for the Future: Overcoming the Failures of the Peace Process. A lecture by  Professor Richard Falk, United Nations Special Rapporteur on Human Rights in the Occupied Palestinian Territories. Flyer.

October 2, 8pm (Friday) - Palestine, a special performance by Najla Said. This visceral one-woman theater piece sheds light on what it means to be Arab, to be American, to be aware. Flyer.

July 26, 2009 (Sunday) 12:30 pm - Firsthand Experiences in Gaza and Israel: Stories and Dialogue.  As the siege of Gaza continues and Netanyahu resists Obama's call for a settlement freeze, news about the strained relations between Israel, the Occupied Territories of Palestine, and the United States has been voluminous. Two Montgomery County residents who just returned from three weeks of travel with CODEPINK to Gaza and Israel will provide a firsthand account of the “facts on the ground.” Shelley Cohen Fudge and Pam Rasmussen will tell their stories and lead what we hope will be a spirited discussion of the prospects for peace and how you can help. Fireside Room, River Road Unitarian Universalist Congregation, 6301 River Road, Bethesda, MD 20817 Phone:  301/229-0400

July 12, 2009 (Sunday) 1-3 pm - Bette Hoover of Just Peace Circles will give a presentation on her recent trip to Israel/Palestine and her work with BUSTAN - Bedouins vs. the State of Israel: From Freedom to Fear at Howard County Central Library, 10375 Little Patuxent Pkwy, Columbia, MD. Details in a PDF flyer.

Nakba Photo Exhibit at the United Methodist Building, 100 Maryland Ave. NE, will be on display in the Methodist Building lobby Feb. 3 - 24. This exhibit, entitled Our Story: A Photo Exhibit Commemorating 60 Years of Disposession, is available to borrow within the DC Metro area. A sampling of the exhibit may be viewed in PDF format from Friends of Sabeel-Canada.
See here for details about utilizing the exhibit in the DC area.

December 20 (Saturday), 2008, 9:30 am - 2nd Annual Simulcast Worship Service with People of Bethlehem in the Bethlehem Chapel of the National Cathedral. PDF flyer here.

Nov. 16 (Sunday), 2008, 3-5 pm - Give Peace a Chance Campaign - Prayer Service followed by Workshop on Sharing Jerusalem: What Does It Mean? at Lutheran Church of the Reformation on Capitol Hill. PDF flyer Here.

November 12-19, 2008 - 7th International Sabeel Conference in Jerusalem and Nazereth - Beyond Remembrance: Facing the Challenges of the Future Sixty Years After the Nakba

Sep. 21 (Sunday), 2008, 2-4 pm - Give Peace a Chance Campaign - Prayer Service followed by Workshop on the Separation Barrier at Dumbarton United Methodist Church in Georgetown. See SharingJerusalem.org for details. A PDF flyer suitable for posting is here.

July 20 (Sunday), 2008, 2-4 pm - Give Peace a Chance Campaign - Prayer Service followed by Workshop on Restrictions on Movement in Palestine at Ravensworth Baptist Church in Annandale. See SharingJerusalem.org for more information.

May 17 (Saturday), 2008, 2-4 pm - WIAMEP is sponsoring "Al-Nakba Commemoration: Palestine, 60 Years of Ethnic Cleansing (1948 – 2008)" on 3rd Str SW between Pennsylvania and Maryland Aves at the Capitol Reflecting Pool, near the National Museum of the American Indian (center of this map).  Program will include speakers whose families were forced to leave their homes and villages during the establishment of the State of Israel. · Informative PDF flyer with resource list · Website with more Nakba info · Powerpoint Slide Show of this event (3 MB)

May 10-14, 2008 - You are invited to hear Dr. Alice Rothchild speak at one of eleven events in the Washington DC metro area May 10-14. Her itinerary is listed here. Dr.  Rothchild is a Jewish obstetrician/gynecologist who has become involved in Middle East peace efforts and has spent a considerable amount of time in the region working with Palestinian and Israeli women and children. She co-founded and co-chairs the Boston chapter of Jewish Voice for Peace, formerly Visions of Peace with Justice in Israel/Palestine, and organized the Jewish American Medical Project, now the JVP Health and Human Rights Project.


March 10 - April 30, 2008 - Give the Gift of School Back Packs to Palestinian Children. Drop-off sites in DC, Annandale, and Springfield.

April 20-22, 2008 - We encourage your participation in the Annual CMEP Conference at Gallaudet University in Washington, DC.

Sunday, Jan. 27, 2008  was an Interfaith Prayer Service at St. Alban's Episcopal Church calling for an end to the Gaza blockade and the ongoing violence followed by a Vigil at the Israeli Embassy. View Press Release (pdf) or press coverage (pdf).

Meet Yonatan Shapira and Bassam Aramin when they visit our area Jan. 21-24.  They are founding members of Combatants for Peace  and will be speaking about the experiences that transformed them from combatants to peacemakers, and about the Abir's Garden project, a playground being built in memory of Bassam's daughter, Abir, one of 863 children who died at the hands of Occupation forces since 2000.

Dec. 6 Noon - DAOUD NASSAR of the Tent of Nations (near Bethlehem) at FCNL, Washington, DC. 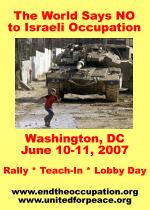 June 10-11 - The World Says No to Israeli Occupation!
On the 40th anniversary of Israel's illegal military occupation of the Palestinian West Bank, Gaza Strip, and East Jerusalem, huge mobilization was a huge success! The protest, teach-in, and lobby day was put together by the US Campaign to End the Israeli Occupation and United for Peace and Justice.

Feb. 3 - Join us for an ICAHD Fundraiser at Busboys and Poets

Rev. Naim Ateek is in DC in February to speak about Christianity and Palestine:

Mr. Awad was in the United States to meet with prominent nonviolent activists in connection with an International Conference on Nonviolence that will take place in Bethlehem, Palestine in December 2005. The principle purpose of this conference is to bring together civil rights leaders, nonviolence trainers and peace activists from around the world to share ideas and experience. The Holy Land Trust is a not-for-profit organization established in 1998 with the aim of strengthening, encouraging and improving the Palestinian community. The Trust supports the Palestinian community in developing nonviolent resistance approaches towards ending the occupation and establishing political independence.


Bustan speakers will be holding a number of events in the DC area to raise awareness and funds. The main evening event will be held at Temple Shalom on the evening of May 3rd, 2005. This will be a great opportunity to learn about issues and initiatives not often heard of, from inspiring Jewish and Arab activists.

is being surrounded by Israeli settlements in order to cut it off from the West Bank and prevent it from becoming the capital of Palestine. This is a major barrier to achieving peace. Read the excellent 2-7-05 Washington Post article (text version) and National Council of Churches statement of concern.

Bethlehem, where Jesus' earthly life began, is being strangled.

Our fellow Christians and Muslims live under duress. Expanding settlements and the Wall threaten to "imprison" them by cutting them off from jobs, schools, churches, hospitals and even Jerusalem. Pray for its people! We encourage you to share your concerns and speak out against this injustice. For more information, please check our website (www.wiamep.org) or call 202-234-5817 (evenings or weekends).

Sites with more information on Bethlehem:

June 7, 2004 -- The Rev. Dr. Mitri Raheb -- 7:30pm at Unitarian Universalist Church of Arlington (Map)     Download a PDF Flyer.     We encourage you to visit The Cave Gift Shop at the International Center of Bethlehem.

March 4th, 2004 -- Dr. Mustafa Barghouthi: Palestine, Israel and the US: Why the Occupation Must End See http://www.palestinemonitor.org